Illustration for American Cresent Cycles, 1899
Frederick Winthrop Ramsdell
About the Art
Ramsdell was an American painter who studied in both New York and Paris. While in Paris he became heavily influenced by the Art Nouveau work of Eugene Grasset and Alphonse Mucha, as can be seen in this striking, though derivative, bicycle poster. Ramsdell depicts a woman and her bike with her tresses and her dress blowing in the wind--and such hair is hard to miss! (Possibly a record for the greatest volume of hair in art history.) From the fabric of the gown to the lilies caught in the wind, the poster has a stylistic similarity to that of the men who inspired him. But the comparisons end with the strong, earthy colors and the large corporate logo which appears at the bottom right. Nevertheless, the image is eye-catching, compelling and powerful. 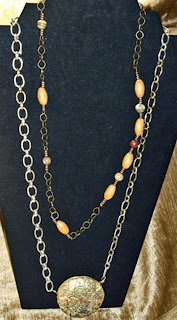 This is a double chained necklace with a self made Granitex polymer clay disc pendant, which has Pearl Ex colors applied and then overstamped with a floral design on the gunmetal chain, and polymer clay round and oval beads on the antique gold chain. I made the lemon wood colored ovals with lemon peel inclusions, which give them a lemon scent.

It is available for sale by clicking this link: Amazing Designs
Posted by Unknown at 12:05 PM