Free Beads for Blogging - the Reveal

Tonya of Fusion Muse blogged back in June: "After sitting and playing with my lovely gemmies and metals a little of late I want to share. It is my hope for as many of you who ask, to be able to play as well. Starting this week we will give away up to 5 parcels of beads to those who have a current, active blog. As time goes on depending upon interest this number may increase." I encourage anyone who would like to join the fun to go to her blog and sign up! 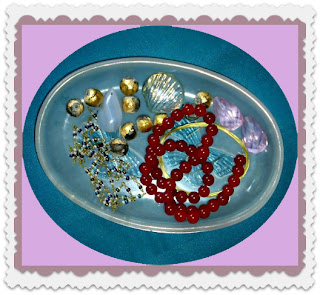 Remember these? They are the goodies I received from her, and I apologize for not getting the finished items posted sooner (Has anyone had a calm and relaxing Summer?)

So without further ado. here are my completed pieces. 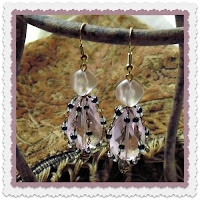 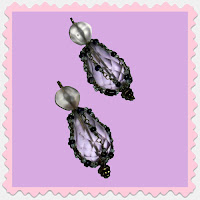 I edged the pink briolettes with the delicate seed beads she sent, and added an opaque pink round as a topper. After that they really didn't need anything more than ear wires. 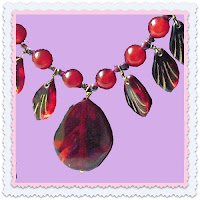 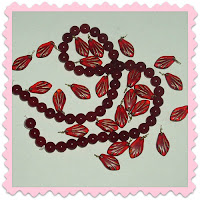 Then I finished wiring my gold edged lucite leaves and I combined them with the ruby rounds she sent separated by smaller garnet rounds for depth. and a large asymmetrical garnet pendant to create my first necklace. 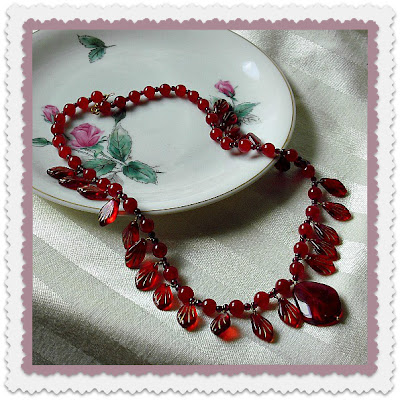 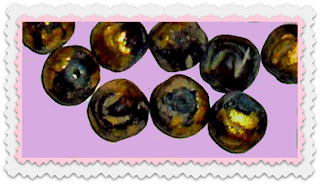 As I noted in my previous post, Tanya's black and gold Japa Mala beads were the perfect compliment to gold leafed beads I had done. So I combined them in a rugged necklace. 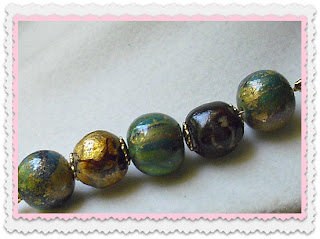 It needed a little something to bring it out, and I had gotten a whole bunch of 10mm jump rings that I wasn't sure what I would use them for, until this necklace called for that little extra. 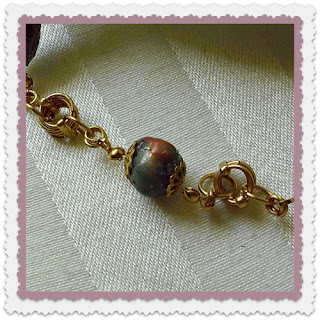 So I batched 5 rings together and crimped another oval jump ring around them to keep them in place, and attached each set as spacers. 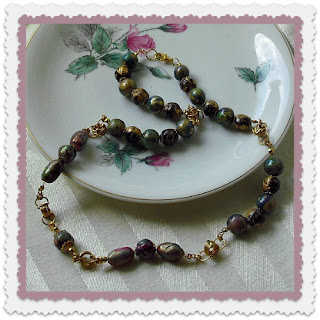 It was just the touch needed to complete my third and final creation.

Hope you enjoyed seeing what I did as much as I had making them.

Thanks and Hugs to you Tanya!