Polymer Clay Goes to the Inauguration 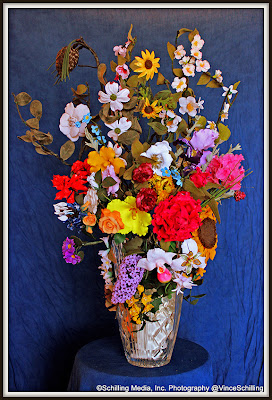 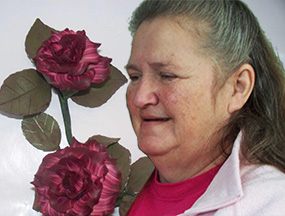 I have to introduce you to a friend of mine, Karonkay Cowger of Spokane, WA. She has been married to David Cowger for 32 years, has 4 children and 10 grandchildren (has me beat). She is also a real animal lover, with 3 cats and a monkey.

She said and I quote: "Have been working with polymer clay for seven years. (my how time flies when you are playing)." Although, she has been beading for almost 35 years. Her first adventure into polymer clay started with an inspiration from Christie Freisen, and she has not looked back since. 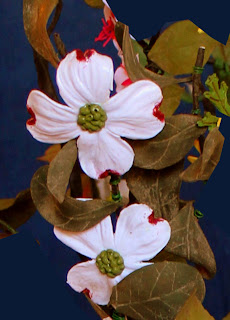 After buying every polymer clay book available. she had fun trying new techniques, and especially likes the mica shift technique because she loves shiny and sparkly things. After she happened on The Polymer Clay Tutor, an instruction site by Cindy Lietz, she tried making dogwood flowers that she thought she could make to look like real flowers. 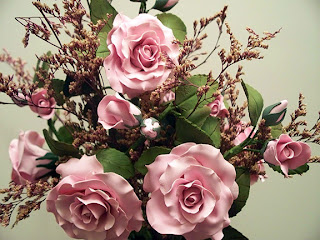 Another quote from Karen: "My mother and I have been avid gardeners for a long time and we both love flowers in all their beautiful color combinations and I usually send mom flowers for her birthday and Mother's Day. I thought she would appreciate everlasting flowers. So I made a branch of dogwoods, calla lilies and roses ( my favorite flower) and a few others. I sent them to my mom. She loved them."

To say her flowers are as close to real as you could ever find, is an understatement! 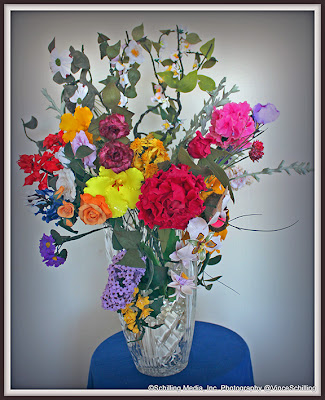 She sent a picture of the flowers to her sister in Virginia. From there it went to the committee of the AIS (American Indian Society) Inaugural Ball 2013. She was asked to do the bouquets for the tables. It began as a simple request for red, white and blue flowers to celebrate the colors of the flag at the ball, but she could not think of enough blue flowers that would be the right shade of blue. She was told to turn her muse loose and come up with what ever she could think of doing.

Her inspiration was: "The coming together of a great nation, voting on your choice for president, and celebrating after a year of strife and politics as usual in the United States where we sling barbs and untruths at each other hoping that the people will vote for which ever candidate you favor. The inaugural ball is a reuniting of the parties on a joyful occasion ( for most of the US it is celebrating the end of Ads and political warfare). To symbolize the uniting of the fifty states caught up in the election I wanted to take the state flower of each state and put them together in a bouquet. My statement piece was, Though we are all different- together we can make a beautiful bouquet".

So for almost a year Karen spent endless hours creating the State Flower of every one of the 51 states, and created the amazing bouquets you see here. 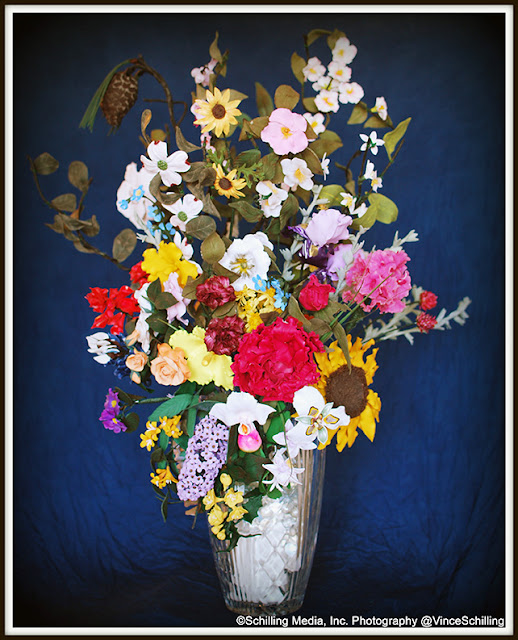 They graced the tables at the Inaugural Ball this past January, and were photographed so beautifully by Vincent Schilling, of Schilling Media, Inc.