Here we are having come full circle. Sally's Focus had brought so much joy and excitement through out the year, and I don't really want to say good-bye. Growing up I only had a brother ~ no sisters. You all know by now I have two daughters, and love the special bond they have. But now due to Sally and you all, I have so many because of the sharing we have had. My dearest and sincerest ~ THANK YOU!

I won't say Good-bye to any of you, and hope that we continue what we started a year ago, so as my parting gift I leave you one more prose that I wrote. 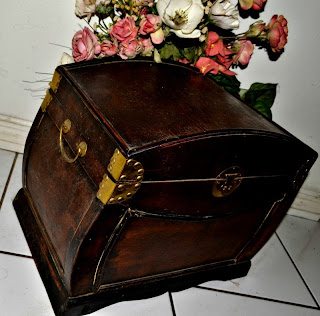 A Memory Box
In the dark and musty corner of the attic is a tightly bound box. How long has it been there? Who hid it away so that it would not be found until a curious mind came across it? Do I have the right to open it? Was it for me to find? Now?
Why had my brothers and I not seen it before? We spent so many hours up here, play acting, exploring each find like treasures from a sunken pirate ship. Did we not want to see it, or were we so busy in our own lives that it seemed too inconsequential? Just a box with strong twine saying I have been here, and will always be. Something makes me not want to open it, even though a deeper feeling says I must. The cord is tight and with a fierceness that prevents my hands from undoing it. It does finally give out, and allows me entry into the neatly wrapped contents within.
A quilt of old sailcloth from years gone by, sewn in squares that tell the story of a rugged life, each by hand but with wisdom to be passed to the next generation.
A housewife’s duster of faded pale pink flowers, with delicate lace on the collar, white pearl buttons down the front, that almost brings back the fragrant aroma of the pies grandma would bake.
A uniform cap, still starched stiff, lying flat now, but once folded and worn with a fierce pride in the work that mom had always dreamed of doing.
A satin pouch, cinched at the top, and embellished with tiny pearls, some glaringly missing, holding within it a neatly folded hankie of fine white linen, with blue initials embroidered on it.
A baby blanket of the softest yarn, in what would today be called neutral colors, but back then colors of hope, and deepest love. Only this one seems never to have been used. Was it for our older sister, we never had the chance to meet?
Pairs of white shoes, of sturdy leather, high on the sides, soles barely worn, reminders of the tiny feet that wore them, long since grown. They were, each in their own, firsts of the many others to come, sneakers, patent leather flats, ballet slippers, pumps with heels high enough to cause weak ankles to bend, baseball cleats, combat boots.
A mortar board. Which one of us wore it, and threw it high in the air, with all the anticipation of a life on our own? It being a symbol of our life of independence, a future yet to be lived, but why so important to the one who put it in the box?
At the bottom, holding all the others up, is a delicate, but intricately woven piece of strength. A tapestry rests, not big, but grand in its beauty, a mural of the soul who wove it. Fibers from the edge, color faded, worn with age, unraveling in spirals that have long been impressed into them. All the colors of the spectrum, some standing alone, as if reflections of once in a lifetime moments, some muted, as though just barely meant to be seen, others often repeated to give unity to it all. Where did it originally hang? Was it never meant to be displayed, or was it always in the open, we just had not seen?
With Much Gratitude